The energy demand will rise with social and economic development in the country. The country is dependent on imports for about 83% of its crude oil requirement and to the extent of about 47% in case of natural gas. In order to bridge the gap between energy supply and demand, MoPNG is committed to accelerate the exploration and production activities in the country.

The reforms in Exploration and Production (E&P) sector were initiated through participation of private and foreign companies in oil and gas sector in 1991 when 28 discovered fields (Pre-NELP Discovered Field) were auctioned during 1991-93. Further, 28 Exploration Blocks were awarded between 1990 -1997 known as Pre-NELP Exploration Blocks. Subsequently, after implementation of New Exploration Licensing Policy (NELP) and Coal Bed Methane (CBM) Policy in 1997- 99, the level playing field was provided to the private investors by giving the same fiscal and contract terms as applicable to National Oil Companies (NOCs) for the offered exploration acreage.

In a major policy drive to give a boost to petroleum and hydrocarbon sector, the Government has unveiled a series of initiatives. The reforms in hydrocarbon sector are based on the guiding principles of enhancing domestic oil and gas production, increasing investment, generating sizable employment, enhancing transparency and reducing administrative discretion. Government has formulated path breaking policies to revolutionize the E&P sector which inter-alia includes -

The Directorate General of Hydrocarbons (DGH) was established under the administrative control of Ministry of Petroleum and Natural Gas by Government of India Resolution in 1993. The objective of setting up of DGH was to promote sound management of the Indian oil and natural gas resources having a balanced regard for environment, safety, technological and economic aspects of petroleum activity. In addition, DGH has been strengthened with certain responsibilities concerning the Production Sharing Contracts for Discovered fields/Exploration blocks, promotion of investment through implementation of policies including Discovered Small Field Policy, Hydrocarbon Exploration & Production Policy (HELP) and monitoring of E&P activities.

The chronology of E&P regimes in India 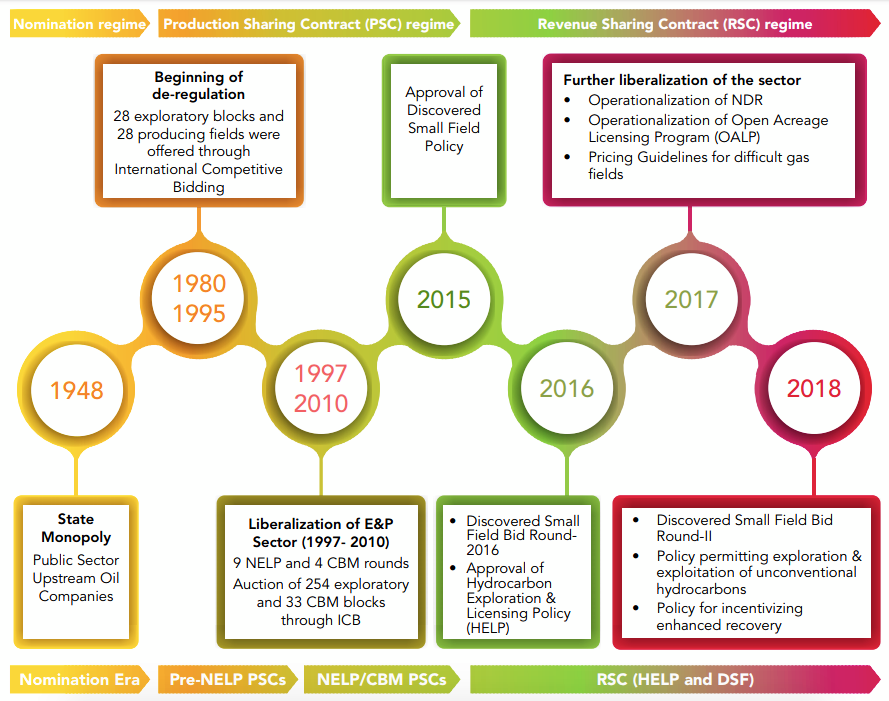 As per India Hydrocarbon Vision 2025, 100% Indian sedimentary area is to be appraised. Onland area covers 1.63 Million Square Kilometres (48.5%) and Offshore area covers 1.73 Million Square Kilometres. As of now, only 48% of the basinal areas have been appraised. About 4% sedimentary basinal area has been declared as "NO GO area" by Ministry of Defence / Ministry of Environment & Forest which remains unapprised. This means, about half of the Indian sedimentary basins have the undiscovered potential of hydrocarbons.

This link shall take you to a external webpage. For any query regarding the contents of the linked page, please contact the webmaster of the concerned website.

Minister of Petroleum and Natural Gas

This link shall take you to a webpage outside mopng.gov.in. For any query regarding the contents of the linked page, please contact the webmaster of the concerned website.